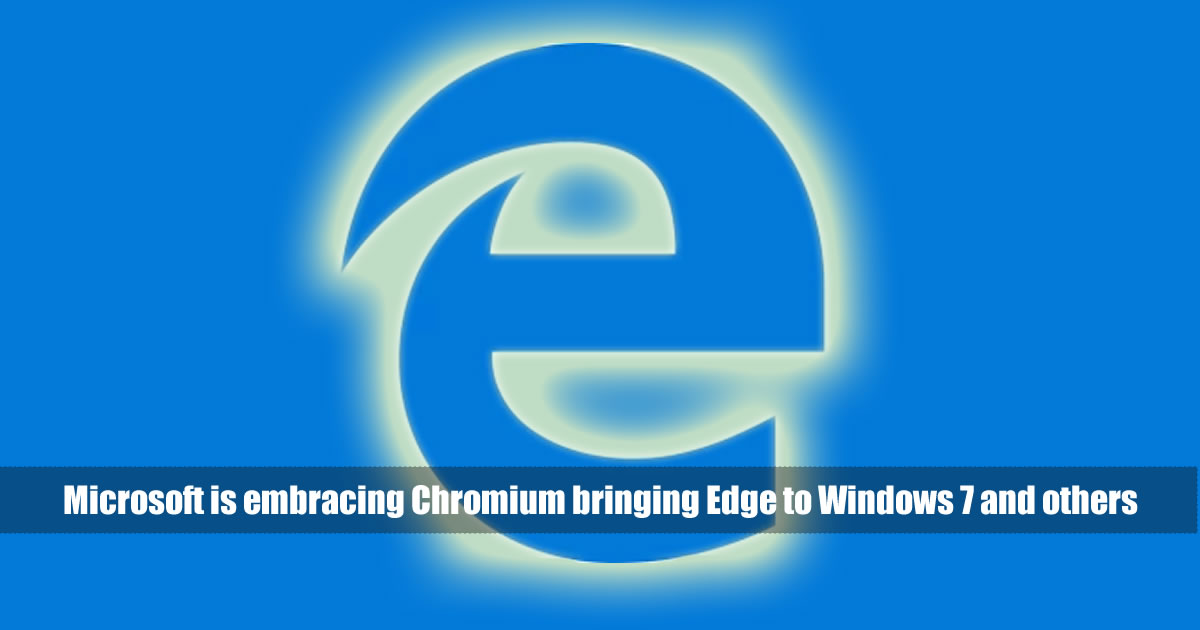 Microsoft is embracing Chromium, bringing Edge to Windows 7, Windows 8, and macOS.  Microsoft yesterday embraced Google’s Chromium open source project for Edge development on the desktop. The company also announced it is decoupling the browser updates from Windows 10 updates, and that Edge is coming to all supported versions of Windows and to macOS.

Microsoft launched Edge in July 2015 as the default browser for, and exclusive to, Windows 10. But it never saw much adoption. Sure, Microsoft claimed Edge had 330 million active devices back in September 2017, but it never did reveal an active user figure beyond “hundreds of millions” (Google said Chrome passed 1 billion active users in May 2015). Edge has 4.34 percent market share today, according to the latest figures from Net Applications.

So Microsoft wants to make some big changes, which it says will happen “over the next year or so.” The first preview builds of the Chromium-powered Edge will arrive in early 2019, according to Microsoft.

Also worth noting: Microsoft is not forking Chromium.

Microsoft hopes moving to Chromium will “create better web compatibility for our customers” and “less fragmentation of the web for all web developers.” The former is certainly true, as the Edge web platform will thus become aligned with web standards and other Chromium-based browsers. The latter is not true in the short term (plenty of testing will be needed to accommodate the switch) but it is likely in the long term, as developers will have one fewer browser to explicitly test against.

No longer wasting resources on building Edge’s backend will likely turn out to be a big win for Microsoft. It is a lot of work to constantly update a browser engine to be standards-compliant and compatible with the actual web. Microsoft has decided to let the open source community do that instead, which it will participate in, so it can focus on improving the browser itself.

Again, Edge isn’t changing significantly. This is an “under the hood” transformation, and most Edge users won’t notice anything significantly different — save for some sites working as expected.

The future of EdgeHTML and Chakra

Edge uses Blink/Chromium on Android and WebKit/WKWebView on iOS. Thus, when Edge on desktop moves to Blink and V8, the main use case for EdgeHTML and Chakra will disappear overnight.

Windows 10 apps that use EdgeHTML and/or Chakra will be able to keep using them, according to Microsoft. But, Microsoft will also eventually let app developers leverage the Chromium-based solution that Edge will use. This will likely impact regular apps that render web content but also Progressive Web Apps (PWAs), which are essentially mobile websites that mimic native apps.

App developers will thus be able to choose to keep using the legacy option or switch to Chromium. Microsoft says it has no plans to stop maintaining EdgeHTML and Chakra, although if usage were to decline, developers could expect them to hit end of support eventually.

In addition to better web compatibility, Edge users stand to benefit from support for Chrome extensions. Microsoft expects that it will be very easy for developers to bring their Chrome extensions to Edge. It might even be the case that it requires no work at all in most cases, but it’s too early for the company to say so definitively.

Microsoft’s intention is to support existing Chrome extensions in Edge, but how exactly this will work remains to be seen. Keep in mind that for years now, Google has been locking down the Chrome Web Store and Chrome extensionsin general — Microsoft will have to be careful with its solution.

All supported versions of Windows

So far, all this largely makes sense, but Microsoft also wants to port Edge to all supported versions of Windows. Edge is no longer going to be a Windows 10-only affair.

This is a massive undertaking that one can only justify through a corporate lens. It’s about letting IT departments offer a heterogeneous browser environment. Microsoft wants everyone on the latest version of Windows, but for those that cannot, or refuse to, upgrade, it has decided to bring the latest Edge to them. That means bringing Edge to older versions of Windows, including older versions of Windows 10. Within major organizations, there are computers running all sorts of Windows versions, and right now only a single one can get the latest version of Edge.

If you thought supporting old Windows versions was nuts, your jaw will drop when you hear Microsoft also wants to bring Edge to macOS. This is bizarre for several reasons, not even including that Microsoft ceased development of Internet Explorer for Mac in June 2003 and Apple killed Safari for Windows in July 2012. But the same heterogenous environment thinking applies: Microsoft wants all devices in an organization using the latest Edge, and that requires getting Macs onboard.

Indeed, Microsoft doesn’t expect to get a lot of Mac users switching to Edge, the company said. Instead, the company simply wants to make it easier for more developers, many of whom use Macs, to test against Edge. Bringing Edge to macOS is about developers, not market share.

Even if you do have the latest Windows 10 version, Edge updates today are tied to Windows 10 updates, and half a year is a long time on the web. It’s a long time to wait for compatibility fixes, performance improvements, and new features.

Could Edge get more frequent updates than Chrome and Firefox? I’m not holding my breath. But Microsoft does say that agility will be a focus going forward and does expect “a more frequent cadence” than the current six-month wait.

The priority will, however, be web platform enhancements to make Chromium-based browsers better on Windows devices. Microsoft stands to benefit if the web works well on Windows, as the impact trickles down to its customers, partners, and the overall business.

Microsoft intends to continue work on ARM64 support, but it also hopes to improve Chromium’s web accessibility and take advantage of other hardware features like touch support. Indeed, Edge is the only major browser with a 100 percent HTML5Accessbility score and is known for having solid touch scrolling performance.

In fact, Microsoft doesn’t want to switch to Chromium until some of that functionality has been contributed to the project. That way, Edge won’t lose features when the switch happens next year.